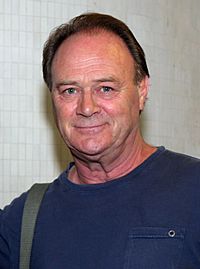 Christopher de Lerisson Cazenove (17 December 1943 – 7 April 2010) was an English actor. He was born in Winchester, Hampshire. He was known for his roles as Charlie Tyrell in The Duchess of Duke Street, Edward in Three Men and a Little Lady, John Thatcher in A Knight's Tale and as Ben in Dynasty.

All content from Kiddle encyclopedia articles (including the article images and facts) can be freely used under Attribution-ShareAlike license, unless stated otherwise. Cite this article:
Christopher Cazenove Facts for Kids. Kiddle Encyclopedia.