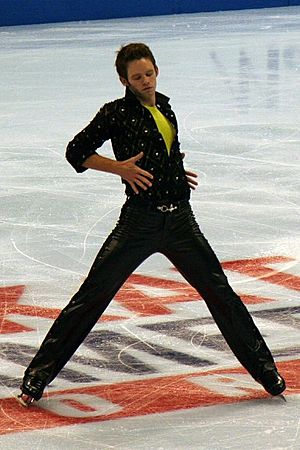 Christopher Mabee (born on August 26, 1985 in Tillsonburg, Ontario) is a figure skater from Canada. He won the silver medal (second place) at the 2007 national championships. This earned him a spot to the 2007 World Championships, his first time ever at that competition.

Mabee is a good friends with Jeffrey Buttle. They train together and have the same coach.

Mabee's rise to the top of Canadian skating has been slow and steady. In the 2003/2004 season, he won the bronze medal at the Junior Grand Prix Final. He is the second Canadian man to ever win a medal at that competition (after Fedor Andreev).

Mabee just barely missed a place to the 2006 Winter Olympics. However, instead of going to that competition, he went to the 2006 Four Continents Figure Skating Championships, a competition for skaters from countries that are not in Europe. He won the silver medal at that competition.

Mabee is well liked by the crowds in exhibition. He is known for his humor on the ice. He often chooses music that makes fun of himself or is light-hearted. At the 2006 Four Continents, he skated a program to Play that funky music, white boy. At the 2006 Nationals, he started his exhibition with a funny song about his home town of Tillsonburg.

All content from Kiddle encyclopedia articles (including the article images and facts) can be freely used under Attribution-ShareAlike license, unless stated otherwise. Cite this article:
Christopher Mabee Facts for Kids. Kiddle Encyclopedia.