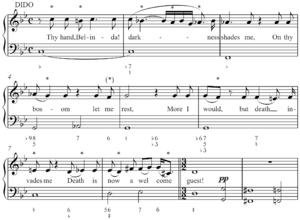 Melodies can be based on a diatonic scale and maintain its tonal characteristics but contain many accidentals, up to all twelve tones of the chromatic scale, such as the opening of Henry Purcell's Thy Hand, Belinda, Dido and Aeneas (1689) (, with figured bass), which features eleven of twelve pitches while chromatically descending by half steps, the missing pitch being sung later.

Meaning of the word “chromatic”

The word “chromatic” comes from the Greek word “chromos” meaning “color”. Organists in the 16th and 17th centuries such as Sweelinck liked to write “Chromatic Fantasias”. These were pieces based on tunes which were chromatic. In those days, because of the tuning systems used, not all the semitones were exactly the same size. Going up a chromatic scale would have been like walking up a staircase with steps which were slightly larger or smaller in depth. This made chromatic scales very interesting and “colourful” which is why they were called “chromatic”.

Chromatic harmony means harmony (chords) which use notes which do not belong to the key the music is in (they are not in the key signature). Although Bach in the 18th century used chromatic harmony it was the 19th century composers who used it more and more. Wagner wrote music which was very chromatic: there were lots of sharps and flats and it kept modulating to different key areas. The chord at the beginning of his opera Tristan and Isolde is so famous that it is known as the Tristan chord. It is very chromatic. The music is full of tension because it leaves us wondering which key the music is in.

All content from Kiddle encyclopedia articles (including the article images and facts) can be freely used under Attribution-ShareAlike license, unless stated otherwise. Cite this article:
Chromatic Facts for Kids. Kiddle Encyclopedia.