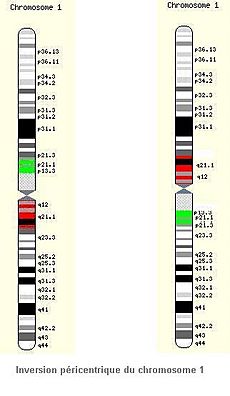 A pericentric inversion is an inversion which includes the centromere.

An inversion loop in a chromosome

What matters is whether the inversion interferes with crossing-over during meiosis. Meiosis is the type of cell division which produces sex cells (gametes).

Both chromosomes the same

If both chromosomes of a pair have the same inversion, and there is no extra or missing genes, then there is no problem with meiosis.

Inversion on one chromosome only

When the homologous chromosomes pair in prophase I of meiosis, the genes on the chromosomes pair up. The only way this can happen after an inversion is if the homologous pairs form a loop. If a cross-over occurs within this inversion loop, it can lead to loss or gain of DNA. For this reason, people with inversions in their germ cells often have lower fertility. This is because the gametes are damaged.

Families that are carriers of inversions may be offered genetic counselling and testing.

All content from Kiddle encyclopedia articles (including the article images and facts) can be freely used under Attribution-ShareAlike license, unless stated otherwise. Cite this article:
Chromosome inversion Facts for Kids. Kiddle Encyclopedia.