This is a Chinese name; the family name is Chu. 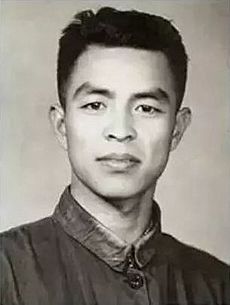 Chu Shijian (Chinese: 褚时健; 17 January 1928 – 5 March 2019) was a Chinese business executive and entrepreneur. He was known as the "king of tobacco" and the "king of oranges". He turned the near-bankrupt Yuxi Cigarette Factory into one of China's most richest state-owned companies and developed the Hongtashan cigarette into one of the country's most valuable brands.

He was convicted of embezzlement in 1997 and sentenced to life imprisonment. After being released on medical parole in 2002, he started his second company at age 75, an orange plantation with the brand name "Chu Orange". It was again highly successful and he became known as the "orange king". He was born in Yuxi, Yunnan, Republic of China.

On 5 March 2019, Chu died from complications from diabetes at a Yuxih ospital, aged 91.

All content from Kiddle encyclopedia articles (including the article images and facts) can be freely used under Attribution-ShareAlike license, unless stated otherwise. Cite this article:
Chu Shijian Facts for Kids. Kiddle Encyclopedia.