Chuginadak Island (Aleut: Tanax̂ Angunax̂; Russian: Чугинадак) is the largest island in the Islands of Four Mountains subgroup of the Aleutian archipelago. Chuginadak is an Aleutian name published by Captain Tebenkov in an 1852 map. According to Knut Bergsland's Aleut Dictionary, the Aleutian word "chugida-lix" means "to fry, to make sizzle." The Western half of the island is called Chuginadax in Aleut, meaning 'simmering'.

The island is approximately 14 by 6 miles (22.5 by 9.7 km) long and the currently active Mount Cleveland stratovolcano forms the entire western half of the land mass. A narrow strip of land separates the volcano from the rugged and lower eastern side of the island.

The only major geographical place is Applegate Cove (2.5 miles across) (Chuguuĝix̂) on the Northern coast. The cove was named for Samuel Applegate, USC&GS, who commanded the schooner Nellie Juan during a survey of this area in the 1880s. 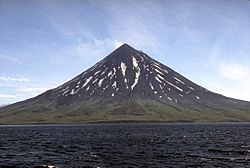 All content from Kiddle encyclopedia articles (including the article images and facts) can be freely used under Attribution-ShareAlike license, unless stated otherwise. Cite this article:
Chuginadak Island Facts for Kids. Kiddle Encyclopedia.