The Church Street Bridge is an historic road arch bridge over the Yarra River and the Monash Freeway in Melbourne, Victoria, Australia. It links Church Street in Richmond on the north bank with Chapel Street in South Yarra on the south. 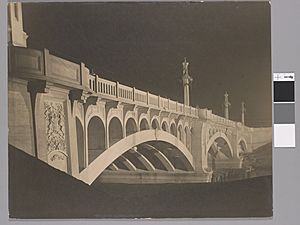 The first bridge on the site was an iron girder bridge built in 1857. Purchased from the British government at the end of the Crimean War, this bridge had a 210 feet (64 m) span with side trusses being solid riveted iron 10 feet (3.0 m) high, designed to prevent Russian snipers from killing British troops. The bridge was dismantled and reconstructed with stone buttresses on the site.

The current bridge was designed by Harold Desbrowe Annear and opened in 1923, having three reinforced concrete arches supported by piled foundations. As originally constructed all three spans crossed the river, but with the construction of the South Eastern Arterial in the 1960s, the river was diverted away from under the northern span, and the four lane road was built there instead. This method of construction reduced the clearance available to traffic on the road underneath, and in the 1990s in conjunction with the CityLink project the arch elements of this span were removed, and replaced by new elements 0.6 metres (2 ft 0 in) higher at the crown and 1.2 metres (3 ft 11 in) higher at either end. Specialised monitoring was required during the process to manage the changing loads on the elements of the bridge.

In January 2007 rehabilitation work was carried out by VicRoads, including waterproofing the concrete deck, replacing the tram tracks, and general resurfacing. This required a total road and tramway closure. Further work commenced in April 2007 and involved replacement of balustrades and new traffic barriers at the kerbs.

The site is listed on the Victorian Heritage Register and is included in a Heritage Overlay.

All content from Kiddle encyclopedia articles (including the article images and facts) can be freely used under Attribution-ShareAlike license, unless stated otherwise. Cite this article:
Church Street Bridge Facts for Kids. Kiddle Encyclopedia.