Church of St John the Baptist, Newport facts for kids 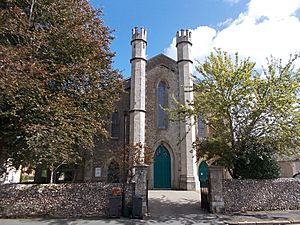 West face of the church.

The Church of St. John the Baptist, Newport is a parish church in the Church of England located in Newport, Isle of Wight. It is a Grade II listed building, the only surviving building by the British architect Robert Gunter Wetten (1804–1868).

It was consecrated on 4 April 1837 by Charles Sumner, Bishop of Winchester.

Originally it was a daughter church within the Parish of Carisbrooke, and known as St John's Church, Carisbrooke. It became a parish church in its own right in 1896, by order of the Privy Council. It is now part of a joint parish with Sts Thomas Minster.

An organ was provided when the church opened in 1837, which was later replaced by a pipe organ by Bryceson Brothers dating from 1890. A specification of the organ can be found on the National Pipe Organ Register.

All content from Kiddle encyclopedia articles (including the article images and facts) can be freely used under Attribution-ShareAlike license, unless stated otherwise. Cite this article:
Church of St John the Baptist, Newport Facts for Kids. Kiddle Encyclopedia.