Church of St Mary the Virgin, Wellingborough facts for kids

The Church of St Mary the Virgin is a Church of England parish church in Wellingborough, Northamptonshire. The church is a Grade I listed building.

The church was built from 1908 to 1930, and was designed by Sir Ninian Comper. It is in the Perpendicular Gothic style. The design and interior of the church was influenced by the Oxford Movement and the Victorian revival of ritualism Financing of the work was largely due to the Misses Sharman of Wellingborough. 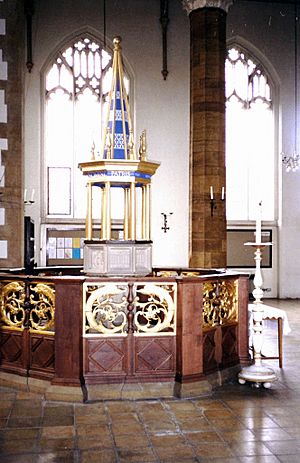 The parish of St Mary the Virgin Wellingborough is in the Archdeaconry of Northampton in the Diocese of Peterborough.

St Mary's stands in the Traditional Catholic tradition of the Church of England. As the parish has passed resolutions to reject the ordination of women, it receives alternative episcopal oversight from the Bishop of Richborough (currently Norman Banks). It is also affiliated with Forward in Faith and The Society.

All content from Kiddle encyclopedia articles (including the article images and facts) can be freely used under Attribution-ShareAlike license, unless stated otherwise. Cite this article:
Church of St Mary the Virgin, Wellingborough Facts for Kids. Kiddle Encyclopedia.