Church of St Mary the Virgin, Yielden facts for kids 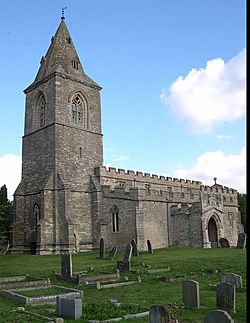 Church of St Mary the Virgin is a Grade I listed church in Yielden, Bedfordshire, England.

It is a good example of a village church mainly in the Decorated style.

Originally the Trailly family received it from the monks at Thorney Abbey early in the 12th Century and was confirmed to them by a charter of Pope Alexander III in 1162.

Although Norman in origin its shows no indication of this in its construction. It consists of a Nave and Chancel dating back to the early 13th Century and had been considerably re-modelled since then, the most notable feature being the tower and broach spire.

All content from Kiddle encyclopedia articles (including the article images and facts) can be freely used under Attribution-ShareAlike license, unless stated otherwise. Cite this article:
Church of St Mary the Virgin, Yielden Facts for Kids. Kiddle Encyclopedia.