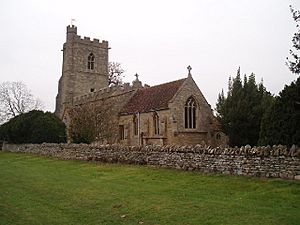 Church of St Owen is a Grade I listed church in Bromham, Bedfordshire, England. It became a listed building on 13 July 1964.

The church is a 17th-century building and stands in a parkland setting. There is an alabaster tomb and a triple brass in the chancel.

In 1740, Lord Trevor donated a library collection to the church, which used to be upstairs.

The church's adjoining Dyve chapel was built in 1868. Some window restorations were also made in the same year.

In 1906, a fire badly damaged the church, though repairs were made.

On 13 July 1964 the church became a Grade I listed building.

The church has a chancel, a north aisle, and chapel on the north side. There are two-storey porches on both the north and south sides, as well as a west tower and stair turret.

All content from Kiddle encyclopedia articles (including the article images and facts) can be freely used under Attribution-ShareAlike license, unless stated otherwise. Cite this article:
Church of St Owen, Bromham, Bedfordshire Facts for Kids. Kiddle Encyclopedia.