Cicely Mary Hamilton (née Hammill; 15 June 1872 – 6 December 1952), was an English actress, writer, journalist, suffragist and feminist, part of the struggle for women's suffrage in the United Kingdom. She is now best known for the feminist play How the Vote was Won, which sees a male anti-suffragist change his mind when the women in his life go on strike. She is also credited as author of one of the most frequently performed suffrage plays, A Pageant of Great Women (1909), which featured the character of Jane Austen as one of its "Learned Women."

Born in 1872, Cicely Hammill in Paddington, London, she was the eldest of the four children of Maude Mary and Denzil Hammil. She was educated in Malvern, Worcestershire and in Bad Homburg vor der Höhe. Hammill was raised by foster parents because her mother had gone missing. After a short spell in teaching she acted in a touring company. She took the pseudonym "Cicely Hamilton" out of consideration for her family. Then she wrote drama, including feminist themes, and enjoyed a period of success in the commercial theatre. Hamilton was praised for her acting in a performance of Fanny's First Play by George Bernard Shaw.

In 1908 she and Bessie Hatton founded the Women Writers' Suffrage League. This grew to around 400 members, including Ivy Compton-Burnett, Sarah Grand, Violet Hunt, Marie Belloc Lowndes, Alice Meynell, Olive Schreiner, Evelyn Sharp, May Sinclair and Margaret L. Woods. It produced campaigning literature, written by Sinclair amongst others, and recruited many prominent male supporters. 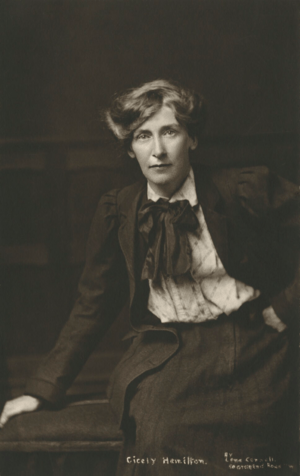 Photo by Lena Connell from the 1910s

Hamilton supplied the lyrics of "The March of the Women", the song which Ethel Smyth composed in 1910 for the Women's Social and Political Union, was first performed at an 'At Home' in Suffolk Street Galleries, Pall Mall to celebrate the release of women violently arrested on Black Friday; it had suitably stirring lyrics for such an occasion:

Shout, shout up with your song!
Cry with the wind for the dawn is breaking.
March, march swing you along,
Wide blows our banner and hope is waking,
Sing with its story, dreams with their glory,
Lo! They call and glad is their word!
Forward! Hark how it swells
Thunder and freedom, the voice of the Lord!

In the days before radio, one effective way to get a message out into society and to have it discussed was to produce short plays that could be performed around the country, and so suffrage drama was born. Elizabeth Robins's Votes for Women and Cicely Hamilton and Christopher St. John's How the Vote Was Won are two predominant examples of the genre. Hamilton also wrote A Pageant of Great Women, a highly successful women's suffrage play based on the ideas of her friend, the theatre director Edith Craig. Hamilton played Woman while Craig played the painter Rosa Bonheur, one of the 50 or so great women in the play. Lena Connell's photographs of the leading players were sold to assist the suffrage cause and Connell exhibited the pictures at the Royal Photographic Society in 1910/11. The play was produced all over the UK from 1909 until the First World War. Hamilton was a member of Craig's theatre society, the Pioneer Players. Her play Jack and Jill and a Friend was one of the three plays in the Pioneer Players' first production in May 1911. Hamilton inspired young schoolgirls, supportive of suffrage, like Winifred Starbuck, who had Hamilton and other leaders pictures on her desk in purple white and green frames and later herself protested in school disorder such as graffiti and hiding the school registers and handbell, a milder form of resistance to authority for women's suffrage.

During World War I Hamilton initially worked in the organisation of nursing care, with the Scottish women's ambulance service near Paris, and then joined the army as an auxiliary. Later she formed a repertory company to entertain the troops. After the war, she wrote as a freelance journalist, particularly on birth control, and was a press officer for the Geneva International Suffrage Conference and as a playwright for the Birmingham Repertory Company. When Lena Ashwell Players Ltd was formed in 1923, Hamilton was one of the directors. The other three were Lena Ashwell, Esme Church and Marion Fawcett. Those three were the company's theatre managers.

Hamilton was a regular contributor to Time and Time magazine, and an active member of the feminist Six Point Group, campaigning for the rights of children, widows and unmarried mothers; equal guardianship of children, and equal pay in teaching and civil service. In 1938 she was given a Civil List pension. She was a friend of E. M. Delafield and is thought to be the model for "Emma Hay" in Delafield's Provincial Lady books.

Hamilton's Theodore Savage (1922, vt. Lest Ye Die 1928) is a science-fiction novel about a Britain devastated by a war.

Hamilton's autobiography Life Errant was published in 1935. She died in Chelsea in 1952.

In July 2017, the Finborough Theatre staged the first London production of Hamilton's play 'Just to Get Married' in over 100 years. It received positive reviews (4 stars) from The Times The Observer The Evening Standard and The New York Times. 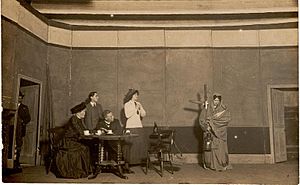 Probably the play 'A Pageant of Great Women' performed by the Actresses' Franchise League.

All content from Kiddle encyclopedia articles (including the article images and facts) can be freely used under Attribution-ShareAlike license, unless stated otherwise. Cite this article:
Cicely Hamilton Facts for Kids. Kiddle Encyclopedia.