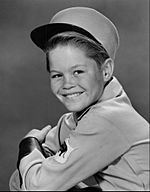 Set in the late 1890s, the title of the series refers to a boy named Corky. After his parents, "The Flying Falcons," were killed in a trapeze accident, young Corky (Micky Dolenz – billed at the time as Micky Braddock) was adopted by Joey the Clown (Noah Beery, Jr.), and the whole Burke and Walsh Circus family.

The young boy quickly found a role with the circus as water boy to Bimbo, a baby elephant whom Corky would come to consider his pet. Riding Bimbo's back, Corky dealt with adolescent problems, and helped the show's adults including Joey, owner/promoter Big Tim Champion (Robert Lowery) and head canvasman Pete (Guinn Williams), keep the circus successful as the traveling show moved from town to town each week.

Outside of an elephant being the animal companion, the series was similar to popular "boy and his dog" shows of the time, such as Lassie/Jeff's Collie, and The Adventures of Rin Tin Tin.

Unusually, the opening credits billed the regular actors by their character names, rather than their own names.

The following cast appeared in the debut episode only. Several sources erroneously list these three, as well as Billy Barty from Episodes 1 and 2, as series regulars.

All content from Kiddle encyclopedia articles (including the article images and facts) can be freely used under Attribution-ShareAlike license, unless stated otherwise. Cite this article:
Circus Boy Facts for Kids. Kiddle Encyclopedia.