Jane Darwell (born Patti Woodard, October 15, 1879 – August 13, 1967) was an American actress of stage, film, and television. With appearances in more than one hundred major motion pictures spanning half a century, Darwell is perhaps best-remembered for her poignant portrayal of the matriarch and leader of the Joad family in the film adaptation of John Steinbeck's The Grapes of Wrath, for which she received the Academy Award for Best Supporting Actress, and her role as the Bird Woman in Disney's musical family film, Mary Poppins. Darwell has a star on the Hollywood Walk of Fame. 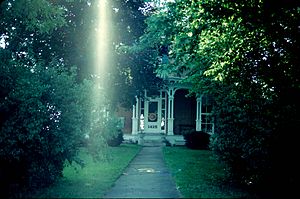 Born to William Robert Woodard, president of the Louisville Southern Railroad, and Ellen Booth in Palmyra in Marion County in northeastern Missouri, she originally intended to become a circus rider, then later an opera singer. Her father objected, however, and she compromised by becoming an actress but changed her name to Darwell.

In her last years, Darwell's health was poor. It took personal persuasion from Walt Disney for her to appear in Disney's Mary Poppins as she was, by then, tired, frail and in her middle eighties.

Darwell died August 13, 1967, at the Motion Picture & Television Country House and Hospital in Woodland Hills, from a myocardial infarction at the age of 87. She is interred at Forest Lawn Memorial Park in Glendale, California.

All content from Kiddle encyclopedia articles (including the article images and facts) can be freely used under Attribution-ShareAlike license, unless stated otherwise. Cite this article:
Jane Darwell Facts for Kids. Kiddle Encyclopedia.