The Adventures of Rin Tin Tin facts for kids

The Adventures of Rin Tin Tin is an American children's television series in the Western genre. Beginning in October 1954 until May 1959, 164 episodes originally aired on ABC television network. It starred Lee Aaker as Rusty, a boy orphaned in an Indian raid, who was being raised by the soldiers at a US Cavalry post known as Fort Apache. His German shepherd dog, Rin Tin Tin, and he helped the soldiers to establish order in the American West. James E. Brown appeared as Lieutenant Ripley "Rip" Masters. Co-stars included Joe Sawyer as Sergeant Biff O'Hara and Rand Brooks as Corporal Randy Boone. 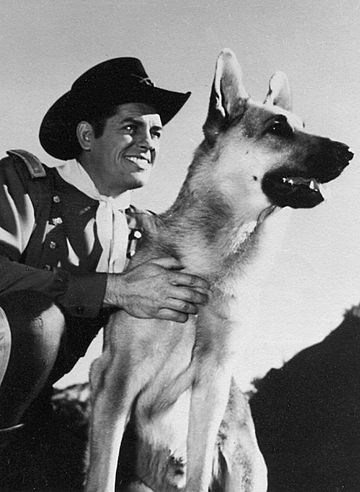 Brown and Rin Tin Tin on a 1955 publicity postcard

The episodes were filmed on a low budget, limiting the film stock to black-and-white. Outdoor action was shot largely at Corriganville Movie Ranch northwest of Los Angeles in Simi Valley, where the production made ample use of the facility's Fort Apache. Additional action sequences were shot on the Iverson Movie Ranch in Chatsworth, known for its huge sandstone boulders and widely recognized as the most heavily filmed outdoor shooting location in the history of Hollywood.

The show's troupe of 12 character actors was often required to play multiple parts in the same episode, sometimes to the point of one actor fighting himself, wearing a cavalry uniform in one shot and an Apache outfit in another. The eponymous dog, Rin Tin Tin IV, lived about 90 miles (140 km) away at Duncan's ranch in Riverside, California, receiving visitors who were eager to see the famous dog.

Robert Fuller, prior to Laramie, appeared as Stan in the 1958 episode "The Epidemic". Harry Cheshire, formerly Judge Ben Wiley on Buffalo Bill, Jr., appeared as Silas Mason in "The Misfit Marshal" (1959).

Brad Johnson (1924–1981), known as deputy Lofty Craig on the syndicated Western series Annie Oakley, appeared once on Rin Tin Tin in the role of John Quinn in the episode "The Iron Horse" (1955).

Robert Knapp was cast in the role of Allen in the 1955 episode "The Guilty One".

Rico Alaniz appeared twice, as Big Elk in "Rin Tin Tin Meets O'Hara's Mother" and as Don Valdez in "The Invaders" (both 1956)

The show ran for five seasons on ABC on Friday evenings from October 1954 to May 1959. ABC reran the series on late afternoons from September 1959 to September 1961. During its first season (1954-1955), The Adventures of Rin Tin Tin finished at number 23 in the Nielsen ratings, making it the second-highest rated series on ABC at the time behind Disneyland, which placed number six.

Reruns ran on Saturdays on CBS from September 1962 until September 1964. A new package of reruns was shown in 1976, and continued into the mid-1980s. The original black-and-white prints were tinted light brown with new opening and closing segments filmed in color in Utah.

The show currently airs in syndication on Antenna TV, with remastered episodes produced by Cerulean Digital Color and Animation, with lines redubbed for some scenes using actors other than those from the original series cast, with a different generic theme song.

All content from Kiddle encyclopedia articles (including the article images and facts) can be freely used under Attribution-ShareAlike license, unless stated otherwise. Cite this article:
The Adventures of Rin Tin Tin Facts for Kids. Kiddle Encyclopedia.