Citizens and Southern National Bank (C&S) began as a Georgia institution that expanded into South Carolina, Florida and into other states via mergers. Headquartered in Atlanta, Georgia; it was the largest bank in the Southeast for much of the 20th century. C&S merged with Sovran Bank in 1990 to form C&S/Sovran in hopes of fending off a hostile takeover attempt by NCNB Corporation. Only a year later, however, C&S/Sovran merged with NCNB to form NationsBank, which forms the core of today's Bank of America.

A former Charleston, South Carolina location, Citizens and Southern National Bank of South Carolina, is the second oldest bank building in the U.S. and possibly the oldest still used as a bank. Constructed in 1798 as the Bank of South Carolina it later became the home for the Charleston Library Society (1835), then belonged to the Charleston Chamber of Commerce (1914), and finally became a bank again when C&S purchased the two-story building in 1966. Located at 50 Broad Street, it is now a private office building. 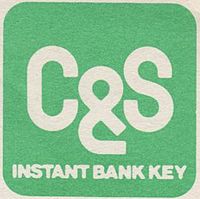 Logo of the Citizens & Southern National Banks of Georgia, used prior to the NationsBank merger

Logo of the Citizens & Southern National Bank of South Carolina, used prior to the NationsBank merger

In preparation to open offices in South Carolina, Citizens and Southern Bank received its charter from the Comptroller of the Currency on May 2, 1927. The "place where its operations ... are to be carried on," is described in that charter as the "City of Savannah, in the County of Chatham and State of Georgia." Mills Lane Jr. and Hugh C. Lane were important figures in the growth and success of C&S. Mills Lane Jr., serving as president, vice chairman and chairman between 1946 and 1973, made C&S the South's largest bank as well as the most profitable of the 50 largest U.S. banks. Hugh C. Lane was elected chairman of C&S in 1960.

In South Carolina, parties associated with C&S of Georgia purchased all the stock of Charleston-based Atlantic Savings Bank and Atlantic National Bank. Atlantic Savings Bank, renamed in 1918, opened October 1, 1874, as the Germania Savings Bank. In May 1928, the names of the two Atlantic banks were changed to Citizens and Southern Bank of South Carolina, although the bank was operating only in Charleston with two locations on King Street and was owned by C&S of Georgia.

In 1985, the Citizens and Southern Georgia Corporation agreed to acquire Citizens and Southern National Bank of South Carolina for $400m or $55/share, reuniting (in 1986) the two banks which had been separated in 1940. At the time the two C&S banks reunited, C&S of South Carolina had assets of $2.5 billion while C&S of Georgia's assets were $12.3 billion.

"Distressed" due to mergers

From 1984–1986, the Southeastern Regional Banking Compact allowed Southern banks with primarily Southern deposits to acquire or be acquired by each other while keeping the feared New York, Chicago, and West Coast banks out. This led several of the stronger Southern banks to begin buying regional competitors in order to make them too rich to be taken over.

Sovran Bank, soon to be purchased by C&S, acquired D.C. National Bancorp in 1986, then Commerce Union Bank in 1987.

Shortly afterward, NCNB, which had grown from a one-state bank into a regional powerhouse, announced plans for a hostile takeover of C&S, and started buying up large blocks of C&S stock. Partly to fend off further takeover attempts, C&S acquired Sovran Financial Corporation of Norfolk, Virginia. The merged company took the name C&S/Sovran, with dual headquarters in Atlanta and Norfolk. The merger created a $47 billion bank with branches in Florida, Georgia, South Carolina, Virginia, Tennessee, Kentucky and the District of Columbia. It appeared to be an enormous Southern super-regional bank rich enough to resist takeover attempts by other banks.

The hasty merger of C&S and Sovran Financial was intended to create a strong, dominant regional bank. However, two problems soon emerged that made C&S/Sovran a takeover target. First was infighting between executives of the two newly combined banks with an Atlanta faction (C&S) and a Virginia faction (Sovran). Second, Sovran had a portfolio of problem loans which weakened the newly merged banks.

NCNB, which had been busy expanding by taking over distressed banks like Texas' First Republic Bank Corporation, quickly recognized that C&S/Sovran was also "distressed". The NCNB purchase of First Republic almost doubled NCNB's assets which helped it to acquire the weakened C&S/Sovran in 1991. C&S/Sovran had $49 billion in assets compared to NCNB's $69 billion in assets upon merger. The merged company took the name NationsBank, headquartered in NCNB's old hometown of Charlotte.

C&S/Sovran merged into NCNB as a stock swap transaction and was valued at $4.259 billion. NCNB issued .84 of its shares for each C&S/Sovran shares. Based on NCNB's closing stock price of $37 on July 19, 1991, the last full trading day prior to the announcement, each share of C&S/Sovran was valued at $31.08.

NationsBank continued to expand, eventually buying BankAmerica Corp. which had previously merged with Security Pacific National Bank of Los Angeles, another large California bank. Although NationsBank was the surviving company, it adopted the better-known Bank of America marque, replacing the old BankAmerica eagle logo with a new stylized logo based on the U.S. flag.

C&S had two headquarters buildings in Atlanta, following its expansion out of Savannah. The first building is still standing and is today the Georgia State University J. Mack Robinson College of Business Administration Building. It was built in 1901, and has 14 floors. It was the first steel framed building to be built in Atlanta. It was known as the Empire Building from 1901–1920, the Atlanta Trust Company Building from 1920–1929, and as the Citizens and Southern National Bank Building from 1929-1992. This building was given as a gift to GSU in 1992 following the acquisition of C&S by NCNB. J. Mack Robinson was a director and large stockholder of NCNB rival, Wachovia Bank.

The Aeck C&S Bank Tower building was dismantled piece by piece after the NationsBank Plaza building opened in June 1992.