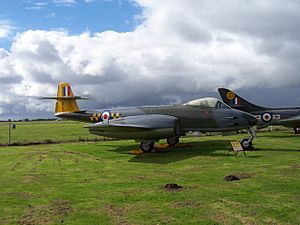 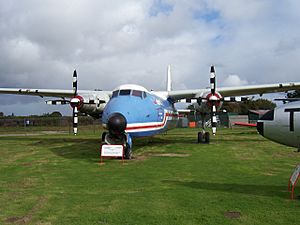 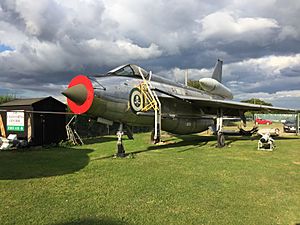 The City of Norwich Aviation Museum is a volunteer-run museum and charitable trust dedicated to the preservation of the aviation history of the county of Norfolk, England. The museum is located on the northern edge of Norwich International Airport and is reached by road through the village of Horsham St Faith. The museum welcomed its newest exhibit in October 2020 when it received EL-RJN this aircraft is 21 years old and is an Avro RJ85.

In 2016, a number of aircraft had to be moved to make room for the Northern Distributor Road. Although part of the museum property was given up for the road, the footprint of the museum actually grew slightly due to a land swap.

All content from Kiddle encyclopedia articles (including the article images and facts) can be freely used under Attribution-ShareAlike license, unless stated otherwise. Cite this article:
City of Norwich Aviation Museum Facts for Kids. Kiddle Encyclopedia.