Ashland, Kentucky's central business district extends from 12th Street to 18th Street, and from Carter Avenue to Greenup Avenue. It includes many notable buildings, such as the Paramount Arts Center, the Henry Clay Hotel and the Ashland National Bank Building. 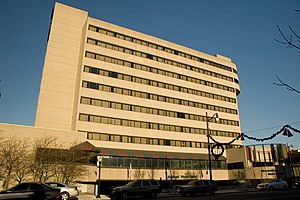 The Ashland Plaza Hotel is a ten-story structure in downtown Ashland. 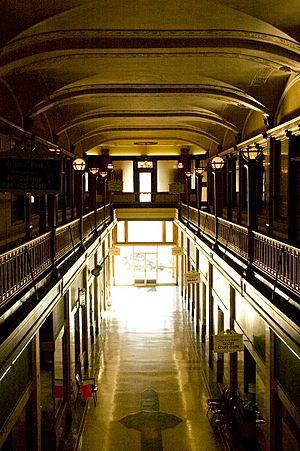 The Kitchen Building was constructed in 1915 as an office building on the corner of 15th Street and Winchester Avenue. The Second National Bank, occupied the first floor beginning in 1915 with other offices occupying the other levels.

In 1923, the Ashland Bank Building was constructed at the corner of Winchester Avenue and 16th Street. The 11-story, 116 ft (35 m) tall building was one of the city's tallest structures.

Constructed in 1926, the Camayo Arcade was considered the "finest in the south" by The Paintsville Herald. It is a four-story structure between Winchester Avenue and the alley, and two-stories between the alley and Carter Avenue. The arcade functioned with numerous shops on the first and second levels, and offices on the upper floors. The façade features a three-bay classical arch design and included bronze marquees at each entrance.

In 1949, Sears purchased the former Field Furniture Building and operated a major department store until 1991.

Designed by the Touche, Dinkeloo and Associates, the Kentucky Power Company building was completed in 1976-77. The five-story glass structure, featuring stainless steel accents, includes an underground parking structure and drive-through lanes. It was later used by American Electric Power and is now host to numerous offices and a restaurant.

On March 8, 1984, ground breaking took place for a new $8.3 million Quality Royale Hotel at the corner of Winchester Avenue and 15th Street. Envisioned originally in 1980 as a hotel, retail and visitors center at 6th Street where the Ashland Town Center resides today, developers instead chose a downtown location. The ten-story, 160-room structure was completed in September 1985 and was renamed Quality Inn upon opening. The hotel features 112,500 sq ft (10,450 m2) of conference space, a 180-seat restaurant, 100-seat lounge, three ballrooms/dining rooms, two seminar rooms, an indoor pool and sauna and a two-story atrium. It is now known as the Ashland Plaza Hotel.

On March 20, 2003, it was announced that Melody Mountain would be developed. Overlooking the city to the west, it is bounded by 6th Street, US 23, and a CSX spur. Initial plans were to include a Wal-Mart, Home Depot, O'Charley's, Fire Mountain and Outback Steakhouse, although Fire Mountain and Home Depot later dropped out of the project; Chick-Fil-A was later added to the project. The $30 million Melody Mountain project was destined to be completed in 2005, however, Phase I opened in early 2006. It was financed partially by $3 million in bonds issued by the city.

Construction on the $10 million Phase II project will begin in fall 2007 and be complete by October 2008. It is being financed partially by the city of Ashland through a $1.5 million bond issue. The development will include a 68,000 sq ft (6,300 m2) Kohl's and five smaller retail stores adjacent to Wal-Mart. A 16,000 sq ft (1,500 m2) shopping plaza will be constructed next to the Chick-Fil-A, which will contain at least one restaurant and four businesses.

Adjacent to Melody Mountain across US 23 is the 55-acre (220,000 m2) Providence Hill development project. It was first announced on December 21, 2004 after the land was purchased several days prior for $700,000. On December 15, 2005, ground was broken for the $30 million housing and retail project. Phase one will include nine three-story apartment buildings for a total of 216 units; upon completion, an eight-story condominium complex will be constructed overlooking downtown Ashland and the Ohio River. The final phase includes the completion of an upscale retail and office complex.

Providence Hill is expected to be complete in late-2007. 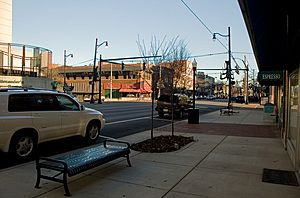 On November 11, 2004, Ashland's Main Street program revealed plans for a streetscape project in the central business district. Billed as an economic development that would spur further revitalization of the downtown, the Kentucky's Main Street's initiative is to utilize state funds to restore business districts. The main focus in the plan is on Winchester Avenue which includes,

Tinted concrete was to be used at crosswalks, but this was changed to brick due to concerns about future maintenance problems.

The city received $850,000 in state grants in 2004 to jump start construction on a segment from 13th to 14th Streets along Winchester Avenue. In 2005, construction extended to 15th Street. An additional $3 million from state and federal grants is required for completion to 18th Street; completion is scheduled for 2008.

Along with the streetscape project, a Judd Plaza renovation is also being planned. More green space, recreational and seating areas, and a stage are envisioned for the brick-lined plaza at the corner of 16th Street and Winchester Avenue. It would be home to concerts, speeches and plays and would tie into the Country Music Highway which runs through the city. In the immediate future, a clock at the plaza may be installed that would honor the city's recent sesquicentennial celebration.

All content from Kiddle encyclopedia articles (including the article images and facts) can be freely used under Attribution-ShareAlike license, unless stated otherwise. Cite this article:
Cityscape of Ashland, Kentucky Facts for Kids. Kiddle Encyclopedia.