The Civic in Manchester Street, Christchurch Central City, was one of the former civic buildings of Christchurch City Council (CCC). Built in 1900, it was first used as an exhibition hall, a cinema and then a theatre. It burned down in 1917. The northern part of the building was purchased by CCC and opened as the civic office in 1924, and served this purpose until 1980. After that it had several uses, including a restaurant, bar and live music venue. The building was heavily damaged in the February 2011 Christchurch earthquake, and was demolished.

The Civic was a Category II heritage building registered with the New Zealand Historic Places Trust.

Construction of the Agricultural and Industrial Hall in 1900 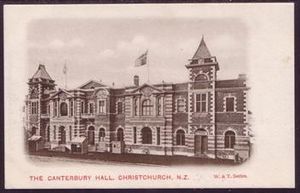 Canterbury Hall prior to burning down in 1917 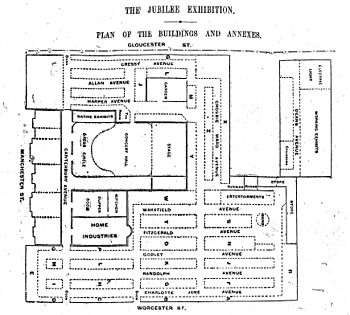 Plan for the jubilee exhibition

The building was formally opened on 1 November 1900 by the Mayoress, Mrs Reece. Later that afternoon, the Governor, The Earl of Ranfurly, opened the jubilee exhibition. The Premier's party consisted of Richard Seddon, Joseph Ward and families. The day was declared as a public holiday from noon.

The Canterbury Hall was then used as a cinema, seating 3,000. In 1906, the building was converted to a theatre with a seating capacity of 1,400, and the name was changed to His Majesty's Theatre. The remodelled building was opened with the premier of the comic opera Erminie on 28 August 1906. Fuller's leased the theatre for a period of ten years in early 1917, but tragedy struck on 11 November of that year when the building was gutted by fire. The building, valued at £21,000, was lost, with only the façade left standing. The city organ, which was donated by the Government after the 1906 New Zealand International Exhibition, valued at £5,000 and insured for £3,750 was also consumed by the flames. The building had only recently been offered to the Christchurch City Council as a town hall. 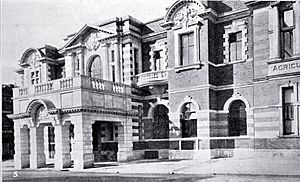 Christchurch City Council started looking for new civic offices in 1919, as the existing offices, these days known as Our City, had become too small. CCC bought the northern part (194 Manchester Street) of the burned out shell in 1920 for their new municipal offices.

The southern half of the old building at 192 Manchester Street opened as the Civic Theatre on 17 March 1928. C. R. Dawe and Francis Willis were the architects for the theatre. That building was demolished in 1983, truncating the impressive 1900 façade by half.

Greenstreet and Anderson were engaged as architects for the civic offices, and W. Williamson was engaged as a builder in 1922. Monica Thacker, the mayoress, laid the foundation stone. The building was opened on 1 September 1924. The design was based on an American banking chamber, where one continuous desk in the form of a horseshoe in the main hall gave access for the public to every department of the council. An imposing portico was built over the footpath, but this was later demolished.

All council staff (apart from specialist services like the electricity department) were once again under one roof, but this lasted only until 1943. With an increase in the number of staff, and other municipalities amalgamating with Christchurch City Council, council started housing some staff in other buildings. By 1978, council staff were in nine different buildings.

The new Christchurch Town Hall was built in Kilmore Street, over the Avon River from Victoria Square, and opened in 1972. Part II of this civic area were supposed to be new civic offices as a replacement for the building in Manchester Street. It was envisaged to build on the corner of Kilmore and Durham Streets, cutting Victoria Street off from going through Victoria Square, but this scheme did not proceed. Instead, the city council purchased Miller's Department Store in Tuam Street in 1978 and fitted this building out as the new civic offices, occupying the building in 1980. The City Council sold the Civic in 1982 for $760,000. 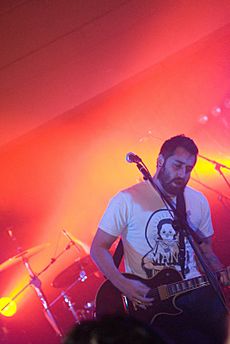 Elemeno P performing at the Civic

The Civic has had several owners and different uses. In 1984, it was the Civic Regency Restaurant. It was renamed The Civic in 1986 and was a bar, and then served as a live music venue, with acts by Salmonella Dub, Shapeshifter, Elemeno P and Anika Moa. It also hosted night time performances of the annual buskers festival. The Civic stopped hosting music events in 2009. 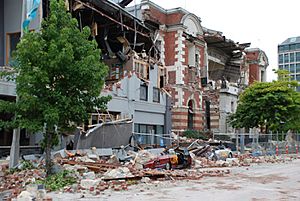 The Civic was heavily damaged in the February 2011 Christchurch earthquake. Much of the façade collapsed into Manchester Street. The building was demolished in 2011.

Following the earthquake, a time capsule was found in the building. It was opened on 12 April 2011 by mayor Bob Parker, together with two further capsules found in the plinth of the toppled Godley Statue. The time capsule from the Civic contained newspapers, a book with photos and the council's balance sheet and statements for the year ended 31 March 1921.

All content from Kiddle encyclopedia articles (including the article images and facts) can be freely used under Attribution-ShareAlike license, unless stated otherwise. Cite this article:
Civic, Christchurch Facts for Kids. Kiddle Encyclopedia.