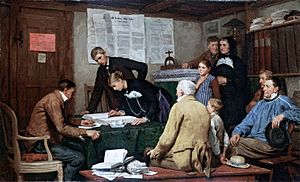 A civil marriage is a marriage that is recognized by a government official. It can either be a religious ceremony or it can be secular. The definition and practice varies greatly between countries.

At present the law allows same-sex marriages as well as man/woman marriages, and both religious and civil settings are possible.

In 1753 an Act of Parliament required all marriages to be done in a religious place. Church of England churches, Quakers meeting places and synagogues were examples of appropriate places.

The Act of 1753 did not apply in Scotland. Marriages were, of course, done in churches. But actually it was enough for a couple to state their commitment in front of witnesses. A registrar would record the marriage. This was a type of common law marriage.

All content from Kiddle encyclopedia articles (including the article images and facts) can be freely used under Attribution-ShareAlike license, unless stated otherwise. Cite this article:
Civil marriage Facts for Kids. Kiddle Encyclopedia.