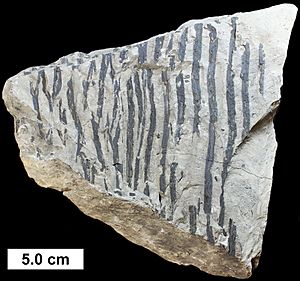 Bark (possibly from a cladoxylopsid) from the Middle Devonian of Wisconsin

The cladoxylopsids are a group of plants known only as fossils that may be ancestors of ferns and horsetails.

They had a central trunk, from the top of which several lateral branches were attached. Fossils of these plants start in the middle Devonian to early Carboniferous periods, mostly just as stems.

Intact fossils of the Middle Devonian cladoxylopsid Wattieza show it was a tree, the earliest known in the fossil record as of 2007. In 2019, experts discovered more fossils of Cladoxylopsida and Archaeopteris in a quarry in Cairo, New York.

All content from Kiddle encyclopedia articles (including the article images and facts) can be freely used under Attribution-ShareAlike license, unless stated otherwise. Cite this article:
Cladoxylopsida Facts for Kids. Kiddle Encyclopedia.