Claw of Archimedes facts for kids 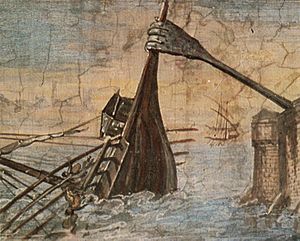 A painting of the Claw of Archimedes by Giulio Parigi

The Claw of Archimedes (also known as the "Iron Hand") was an ancient weapon. It was designed by Archimedes to defend the seaward part of Syracuse's city wall against amphibious assault. Although its exact nature is unclear, the accounts of ancient historians seem to describe it as a sort of crane equipped with a grappling hook. Apparently it was able to lift an attacking ship partly out of the water to capsize or suddenly drop it.

All content from Kiddle encyclopedia articles (including the article images and facts) can be freely used under Attribution-ShareAlike license, unless stated otherwise. Cite this article:
Claw of Archimedes Facts for Kids. Kiddle Encyclopedia.