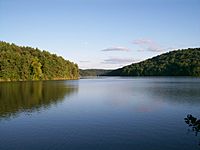 It is part of the Muskingum Watershed Conservancy District, which was created in 1933 to control flooding in the state of Ohio, primarily due to the Great Flood of 1913. It is known as the largest undeveloped lake in the state of Ohio, yet has on its shores: Boy Scout Summer Camp Fort Steuben Scout Reservation Clendening Marina in Freeport, Ohio and the YMCA's Camp Tippecanoe near the town of Tippecanoe, Ohio, along with a campground, playground, and picnic area. Locals to the area have said that there are still buildings under the lake's waters from a former community that existed prior to the area's flooding to create the lake.

All content from Kiddle encyclopedia articles (including the article images and facts) can be freely used under Attribution-ShareAlike license, unless stated otherwise. Cite this article:
Clendening Lake Facts for Kids. Kiddle Encyclopedia.