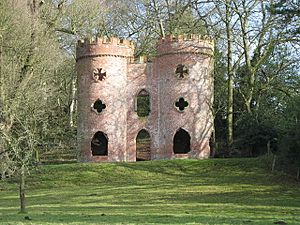 Clent Castle is a sham ruin castellated folly in the grounds of Clent Grove (the site of Sunfield Children's Home) that is situated opposite the Fountain Inn on Adams Hill in Clent, Worcestershire, England. It was built in the late 18th century by Thomas Liell, and it has been designated by English Heritage as a Grade II listed building.

This folly tower appears to have been of similar design to that at Castle Bourne, Bell End, Belbroughton
—English Heritage.

All content from Kiddle encyclopedia articles (including the article images and facts) can be freely used under Attribution-ShareAlike license, unless stated otherwise. Cite this article:
Clent Castle Facts for Kids. Kiddle Encyclopedia.