Clevedon, earlier known as Wairoa South, is a rural town in Auckland, New Zealand, located in the Franklin ward, one of the thirteen administrative divisions of Auckland city. The town is governed by the Auckland Council. 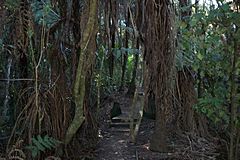 The town and surrounding rural area has a population of 2,508 (2006 census), and is the centre of an administrative ward of Manukau which takes in much of the largely rural area to the east of the urban heart of the city.

Clevedon is located on the Wairoa River five kilometres from its estuary and outflow into the Tamaki Strait, an arm of the Hauraki Gulf. It is 14 kilometres from the centre of the suburb of Manukau, which lies to the northwest. To the south of Clevedon rise the rugged hills of the Hunua Ranges. Several popular beaches are located on the coast close to Clevedon, including Duder's Beach and Kawakawa Bay. Between these two beaches lies the Duder Regional Park.

Clevedon was named for Clevedon, England, in 1866. It was previously known as Te Wairoa (Māori: 'the Long River'). There were formerly many schools located in Clevedon (the Wairoa district) but only one remains, Clevedon School.

All Souls Church is registered by Heritage New Zealand as a Category II structure, with registration number 682.

The Hon Phil Goff, the current Mayor of Auckland and former Labour Party Leader and Foreign and Defence Minister, is a long term resident of Clevedon.

All content from Kiddle encyclopedia articles (including the article images and facts) can be freely used under Attribution-ShareAlike license, unless stated otherwise. Cite this article:
Clevedon, New Zealand Facts for Kids. Kiddle Encyclopedia.