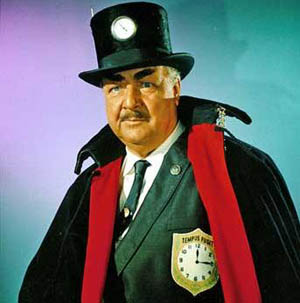 Walter Slezak as the Clock King in the 1960s Batman show.

The Clock King is the name of two fictional characters, both of whom are supervillains appearing in American comic books published by DC Comics. The second Clock King was a villain and enemy of Green Arrow.

The character, originally called simply "the Clock", appeared in July 1947. He had no super-powers or abilities other than a rigid sense of order and timing and punctuality. He wore a blue pin-striped lounge suit, an orange fedora, glasses and a red tie with a picture of a clock.

The second Clock King was originally an enemy of Green Arrow. He also has no super-powers or abilities. He wears a clock mask, a cape, and a blue suit with clock drawings on it.

Born William Tockman, Clock King spends his early years taking care of his invalid sister. One day he finds out from a doctor's visit that he himself only has six months to live. Despairing for his sister's future, he watches the timing of a local bank's vault in order to rob it, hoping the money would provide for his sister after he was gone. His caper would have gone successfully, had he not tripped a silent alarm and been caught by the Green Arrow.

While he is incarcerated, his sister dies alone. In further hideous irony, Tockman discovers that he really is not terminally ill; his doctor had accidentally switched his papers with those of another patient. Infuriated, he escapes, later futilely attempting revenge on the Green Arrow.

All content from Kiddle encyclopedia articles (including the article images and facts) can be freely used under Attribution-ShareAlike license, unless stated otherwise. Cite this article:
Clock King Facts for Kids. Kiddle Encyclopedia.