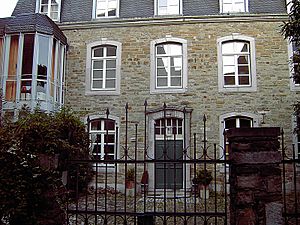 In the 18th century, the cloth mill Offermann was a brass factory in the German city of Stolberg. It was later changed to cloth mill and then to a restaurant and apartment building. The changes show the change of economical needs in that city.

The building was founded as a brass factory. In the 18th century, it was one of many brass factories in the city.

At the end of the 18th century, the brass industry in Stolberg lost importance. The building was sold to a clothier of the nearby village of Imgenbroich. He produced cloth for more than 60 years.

At the beginning of the 19th century, the building was used as a restaurant. Some parts of the building were greatly in need of repair.

At the end of the 20th century, major repairs were done to the building. Currently, it is used as an apartment building.

All content from Kiddle encyclopedia articles (including the article images and facts) can be freely used under Attribution-ShareAlike license, unless stated otherwise. Cite this article:
Cloth mill Offermann Facts for Kids. Kiddle Encyclopedia.