Coalville is a city in and the county seat of Summit County, Utah, United States. It is part of the Salt Lake City, Utah Metropolitan Statistical Area. The population was 1,363 as of the 2010 census. Interstate 80 passes through the town, as well as the Weber River, which flows into Echo Reservoir, just north of Coalville. 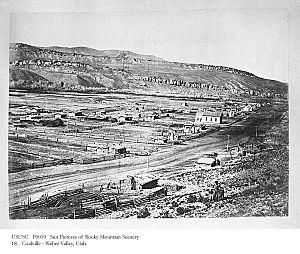 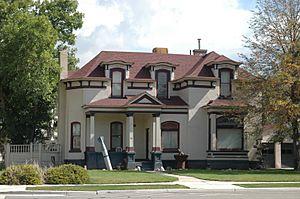 Coalville was founded in 1859 by William Henderson Smith, an early Mormon freighter. He noticed that wheat spilled by other wagons moving through the area would grow to maturity. He subsequently convinced four families to settle in the area with him. The settlement was originally called Chalk Creek.

Early life in Chalk Creek was difficult, and during winters the settlers dealt with a constant scarcity of food. When food ran out, they would travel to Salt Lake City for supplies. The local Indian tribes were also hostile for a time, and the settlers built a fort on advice of Brigham Young.

In 1854 the territorial government in Utah offered a $1000 reward to anyone who could find coal within 40 miles of Salt Lake City. Four years later, Thomas Rhodes found a coal vein in the Chalk Creek area, and coal mining began in earnest. Hundreds of tons of coal were shipped to Salt Lake City, and soon a narrow gauge railroad was built. The settlement was renamed Coalville as a result of this early success mining coal.

Unlike most Mormon settlements in Utah and the intermountain west, Coalville city streets are not aligned to true north. Main Street in Coalville is offset such that it runs slightly north-northwest, and Center street runs slightly east-northeast.

The Thomas L. Allen House in Coalville is listed on the National Register of Historic Places. 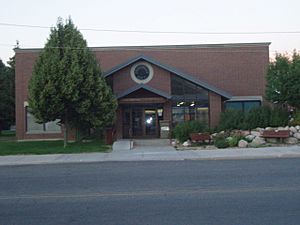 Coalville has a high-altitude humid continental climate (Köppen Dfb), characterised by extreme diurnal temperature ranges that range from extremely cold winter nights to hot afternoons in the summer. However, the high altitude and low humidity means that mornings in summer remain very cool, and frosts have occasionally occurred even in July. Precipitation is moderate throughout the year, though with a minimum in summer, and snowfall is generally heavy due to the very cold nights between November and March, with a median of 60.1 inches (1.53 m) for the year.

Coalville is situated at the intersection of two narrow valleys (formed by Chalk Creek and the Weber River); and like other valley locations in northern Utah, experiences pronounced temperature inversions during winter months, with low temperatures below 0° F relatively common. Owing to this hyper-local phenomenon, observed temperatures are often significantly lower than those forecasted by national agencies, which rely on topography-based algorithms for the area. 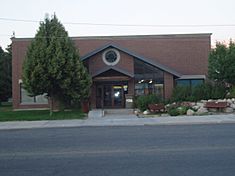 There were 465 households, out of which 47.3% had children under the age of 18 living with them, 68.6% were married couples living together, 8.0% had a female householder with no husband present, and 20.2% were non-families. 18.3% of all households were made up of individuals, and 10.3% had someone living alone who was 65 years of age or older. The average household size was 2.97 and the average family size was 3.41.

Some residents of the Coalville area pursue careers in farming, ranching, construction, public education, and county government—though many commute to the Wasatch Front. Ranchers in the area primarily raise beef and dairy cows, sheep, and mink. Crops such as alfalfa and wheat are also cultivated.

There are two grocery stores, five restaurants, two motels, and several small gas/convenience stores. A health clinic serves residents of Coalville and other settlements in northern Summit County, as well as a dental office. Vacant commercial real estate continues to be a problem, especially along main street, as is the case in many small towns in rural America—an effect of urbanization.

All content from Kiddle encyclopedia articles (including the article images and facts) can be freely used under Attribution-ShareAlike license, unless stated otherwise. Cite this article:
Coalville, Utah Facts for Kids. Kiddle Encyclopedia.