Coat of Arms of Netherlands facts for kids 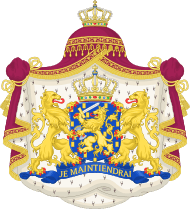 The coat of arms.

The shield is crowned with the Dutch royal crown and supported by two lions. They stand on a scroll Azure with the text "Je Maintiendrai" (medieval French for "I will endure".)

The monarch places this coat of arms on a mantle lined with Ermine. Above the mantle is a pavilion Gules again topped with the royal crown.

In the Royal decree it is stated that the male successors can replace the crown on the shield by a helm.

This version of the coat of arms is in use since 1907.

All content from Kiddle encyclopedia articles (including the article images and facts) can be freely used under Attribution-ShareAlike license, unless stated otherwise. Cite this article:
Coat of Arms of Netherlands Facts for Kids. Kiddle Encyclopedia.