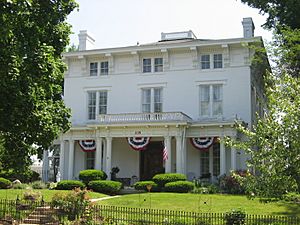 Coates Kinney was born in 1826 near Penn Yan, New York. He was partly educated at Antioch College, Yellow Springs, Ohio, and studied law with Thomas Corwin. He was admitted to the bar in Cincinnati in 1856. He became a journalist, and worked on papers in Cincinnati, Ohio, Xenia, and Springfield, Illinois.

From June 1861 until November 1865, he was a paymaster in the United States Army and was mustered out with the commission of brevet lieutenant-colonel of volunteers. He was a delegate to the convention that nominated Ulysses S. Grant for the presidency in 1868 and its Ohio secretary. He was the senator from the 5th district in the Ohio legislature 1882-1883, and delivered a speech against "The Official Rail Road Pass".

He wrote poetry, and his verses were collected in Keeuka and Other Poems (Cincinnati, 1855) and Lyrics of the Ideal and the Real (1888). Of his verses, "The Rain on the Roof", which was set to music, was the most popular. He died in Ohio in 1904.

All content from Kiddle encyclopedia articles (including the article images and facts) can be freely used under Attribution-ShareAlike license, unless stated otherwise. Cite this article:
Coates Kinney Facts for Kids. Kiddle Encyclopedia.