Coburn Hill is located 4.2 miles (7 km) southeast of Billings, Montana in Yellowstone County. Its most predominant feature is Sacrifice Cliffs, part of the Rimrocks surrounding the city. Another feature is several radio and television broadcast towers located on the hill.

The radio and television tower farm on Coburn Hill in 2013.

Coburn Hill also carries a majority of Billings area television stations. KTVQ, KULR, KBGS, and a number of translators and lower powered stations have towers on the mountain.

Coburn Hill is also the site of a Sulfur dioxide monitoring station operated by the Department of Environmental Quality. 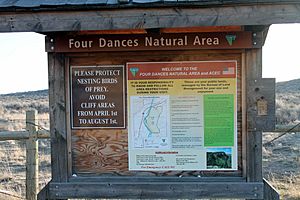 Providing an overlook of the greater Billings area, the southern portion of Coburn Hill is home to the Four Dances Natural Area, operated by the BLM. The BLM acquired Four Dances Natural Area in 1999. The area sits on 765 acres of undeveloped space which includes Sacrifice Cliffs. The area is named after Chief Four Dances, a Crow Indian chief. According to a sign on site, the area was used by Four Dances in the 1830s as a vision quest location. The area is also a frequent nesting location for various birds of prey.

All content from Kiddle encyclopedia articles (including the article images and facts) can be freely used under Attribution-ShareAlike license, unless stated otherwise. Cite this article:
Coburn Hill Facts for Kids. Kiddle Encyclopedia.