Coccothrinax argentata, commonly called the Florida silver palm, is a species of palm tree. It is native to south Florida, southeast Mexico, Colombia and to the West Indies, where it is found in the Bahamas, the southwest Caribbean and the Turks and Caicos Islands. Its natural habitat is rocky, calcareous soil in coastal scrubland and hammock communities.

It is a small (2–6 m tall), slow-growing fan palm with leaves that are dark blue-green above and silver-coloured below. Measurements in Fairchild Tropical Garden showed an average growth rate of 12 centimetres (4.7 in) per year. Flowers are white and small on light orange branches. The fruits are globose and half an inch in diameter. They are initially green and turn purple or black when ripe.

Silver palms in their natural habitat often grow among saw palmetto (Serenoa repens) and cabbage palmetto (Sabal palmetto) which have similar fronds. Silver Palms can be distinguished by its smooth vertical trunk, and its small, crescent-shaped hastula. 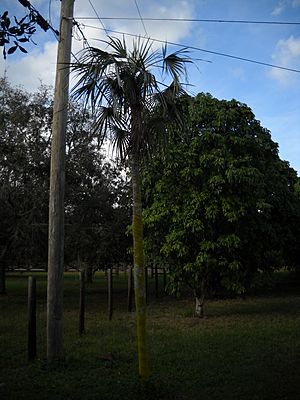 Coccothrinax argentata can be successfully grown in lawns and gardens

Coccothrinax argentata was first described in 1803 by Nikolaus Joseph von Jacquin as Palma argentata. It was transferred to the genus Coccothrinax by Liberty Hyde Bailey in 1939.

Coccothrinax argentata is native to Florida in the southeastern United States, southeast Mexico, Colombia, and parts of the Caribbean, where it is found in the Bahamas, the southwest Caribbean, including the Colombian Caribbean islands, and the Turks and Caicos Islands. Its natural habitat is rocky, calcareous soil, including coastal scrubland and hammock communities.

Bahia Honda State Park in the Florida Keys has one of the largest stands of silver palms in the United States. They can be found on a nature walk just off of Sandspur Beach.

The endangered Florida Key Deer are known to feed on the fruits of the silver palm.

All content from Kiddle encyclopedia articles (including the article images and facts) can be freely used under Attribution-ShareAlike license, unless stated otherwise. Cite this article:
Coccothrinax argentata Facts for Kids. Kiddle Encyclopedia.