Cochran is a ghost town in Pinal County in the U.S. state of Arizona. The town was settled in 1905, in what was then the Arizona Territory.

Named after its first postmaster, John S. Cochran, the small mining camp also served as a stop on the Santa Fe, Prescott and Phoenix Railway. The post office was established on January 3, 1905, and was discontinued on January 15, 1915. At its peak, the town was home to approximately one hundred residents, and housed a general store and a boardinghouse, among other establishments.

Apart from a few building foundations in the town center, and the train tracks that still run by the edge of the now-abandoned town site, Cochran's last and most notable remains are a set of five largely intact beehive coke ovens across the Gila River at Butte, Arizona. 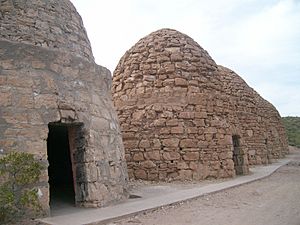 The Coke Ovens are on a 189-acre section of private property, visitation is not allowed.

All content from Kiddle encyclopedia articles (including the article images and facts) can be freely used under Attribution-ShareAlike license, unless stated otherwise. Cite this article:
Cochran, Arizona Facts for Kids. Kiddle Encyclopedia.