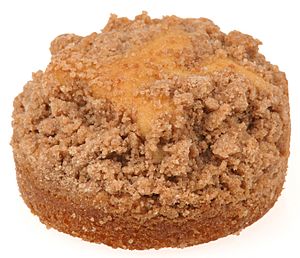 An American style coffee cake with crumbles on top 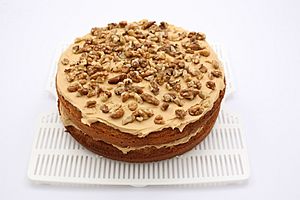 A coffee cake can be either

Coffee cakes can be similar to teacakes, but teacakes are often smaller individual items served with tea.

A variety of crumb cake (Streuselkuchen) which contains flour, sugar, butter and cinnamon granules on top.

Applesauce cake is sometimes prepared and served as a coffee cake.

In Hungary, there is a type of coffee cake called aranygaluska containing walnuts and cinnamon.

Bake in the preheated oven for 25 to 30 minutes or until a toothpick inserted into the center of the cake comes out clean. Allow to cool.

All content from Kiddle encyclopedia articles (including the article images and facts) can be freely used under Attribution-ShareAlike license, unless stated otherwise. Cite this article:
Coffee cake Facts for Kids. Kiddle Encyclopedia.