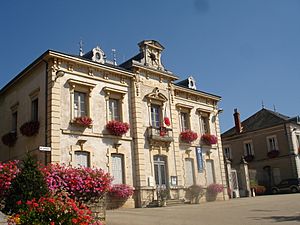 Coligny (Arpitan: Colignêcode: frp is deprecated ) is a commune in the Ain department in eastern France.

The commune lies near Bourg-en-Bresse; the Solnan forms its southwestern border. 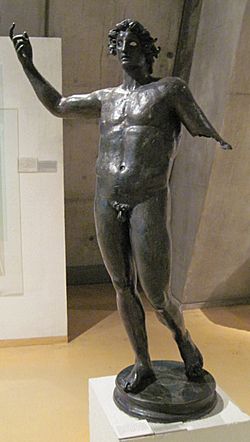 Coligny is famed for its Celtic lunisolar calendar, the "Coligny calendar". The calendar, which dates from the turn of the 1st century, has been key in the understanding of the knowledge of astronomy among the Gauls, and also supplied interesting information about their language (e.g., their names for months and the words for "lucky" and "unlucky"). It was an engraved bronze tablet originally discovered as fragments in 1897. It is written in the Latin alphabet and it represents a five-year cycle composed of three years having twelve lunar months and two years (the first and third) having thirteen lunar months.

At the end of the 19th century a bronze statue was discovered in the town and has been christened the Dieu de Coligny (God of Coligny).

All content from Kiddle encyclopedia articles (including the article images and facts) can be freely used under Attribution-ShareAlike license, unless stated otherwise. Cite this article:
Coligny, Ain Facts for Kids. Kiddle Encyclopedia.