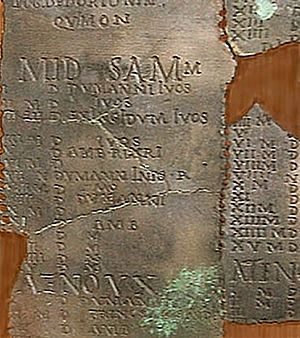 The Coligny calendar is a celtic calendar from roman times. It was found near Lyon in 1897. It was made of bronze, but today, only fragments remain. Studies found that these fragments made up a gallic calendar, which had been created for a period of five years. The calendar indicates both the time of the solar year and the phase of the moon, which is generally called a lunisolar calendar.

It was engraved on a bronze tablet, preserved in 73 fragments, that originally was 1.48 m wide and 0.9 m high (Lambert p. 111) or approximately 5 feet (1.5 m) wide by 3½ feet in height. Based on the style of lettering and the accompanying objects, it probably dates to the end of the 2nd century AD. It is written in Latin inscriptional capitals and is in the Gaulish language (Duval & Pinault). The restored tablet contains sixteen vertical columns, with 62 months distributed over five years. 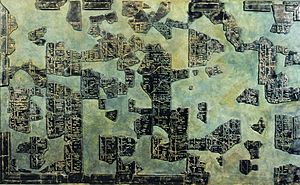 The French archaeologist, J. Monard, speculated that it was recorded by druids wishing to preserve their tradition of timekeeping in a time when the Julian calendar was being imposed throughout the Roman Empire. However, the general form of the calendar suggests the public peg calendars (or parapegmata) found throughout the Greek and Roman world (Lehoux pp. 63–65).

All content from Kiddle encyclopedia articles (including the article images and facts) can be freely used under Attribution-ShareAlike license, unless stated otherwise. Cite this article:
Coligny calendar Facts for Kids. Kiddle Encyclopedia.