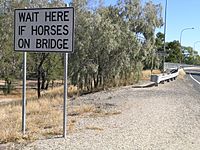 Collarenebri is a town in north western New South Wales, Australia. The town in the Walgett Shire local government area and on the Barwon River approximately 75 kilometres (47 mi) northeast of Walgett and south west of Mungindi on the Gwydir Highway. It is 16 km (9.9 mi) from Pokataroo which was the nearest railway town prior to closure of the rail service there. The town is 150 metres (490 ft) above sea level.

Collarenebri is an indigenous word of the Gamilaraay galariinbaraay, meaning 'place of flowers' or 'eucalyptus blossoms'.

Originally spelt "Collarindabri", Collarenebri is located near a shallow rocky ford on the Barwon River, which provided a hard bottomed shallow river crossing for stock and pioneering travellers.

In 1860 William Earl settled near the Collarenebri crossing and established "The Squatters Arms" to capitalise on the increasing traffic through the area. Earl and his pub later became famous for having been held up by bushranger Captain Thunderbolt. Earl is credited with having established present day Collarenebri, with a prominent street and aged housing carrying his name. A number of his descendants still reside in the town.

By the end of 1865, Collarenebri is described as having "two stores, a public house, with another nearly finished: the timber is also lying at Collarenebri for a Government punt; several small houses and a population of about 50 people stationary."

The town of Collarenebri was later gazetted on 12 July 1867. By 1890 Collarenebri had become a growing town with a hospital, police station, school and a number of businesses. The cemetery at Collarenebri dates back to 1906.

Collarenebri has long been recorded as a significant site for Aboriginal people living in the area. There are many artifacts and significant sites along the Barwon River. On Collymongle Station there are some very old aboriginal carved trees. There is a well maintained Aboriginal cemetery just outside the town which is unique to the area, with graves covered in crushed and melted glass and decorated with items that represent that person.

Many of the buildings in Collarenebri today date back to c.1910. Collarenebri was among the last places in Australia to be converted from a manual switchboard to an automatic telephone exchange (in 1986). Volunteers run Collarenebri's live, local radio station YAAMA-FM 95.9 specialising in indigenous programming.

Industries in the area include cotton and wheat farming, sheep and beef cattle breeding. Other activities include fossicking for gemstones such as topaz, agate and petrified wood.

Collarenebri continues to be a significant community for Aboriginal people.

The Barwon River area is regarded as one of the best inland fishing locations in Australia.

All content from Kiddle encyclopedia articles (including the article images and facts) can be freely used under Attribution-ShareAlike license, unless stated otherwise. Cite this article:
Collarenebri Facts for Kids. Kiddle Encyclopedia.