Colonels Mountain is a mountain in the Canadian province of New Brunswick. It lies adjacent to Big Bald Mountain, at the headwaters of the Northwest Miramichi River and the Sevogle River. 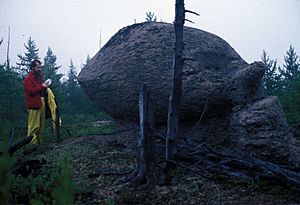 The mountain top has been weathered to generate a series of mushroom-shaped granitic tors. Because the weathering process which forms tors is normally very slow, these features have been interpreted as indicating that part of northern New Brunswick escaped the last, Wisconsinan glaciation. It has been suggested, however, that the mountain lay near the centre of the ice cap; these erosional remnants thus escaped the scouring action of the glaciers.

All content from Kiddle encyclopedia articles (including the article images and facts) can be freely used under Attribution-ShareAlike license, unless stated otherwise. Cite this article:
Colonels Mountain (New Brunswick) Facts for Kids. Kiddle Encyclopedia.