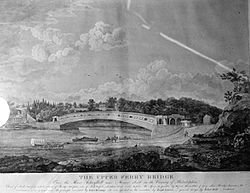 The Colossus Bridge – also known as Fairmount Bridge, Colossus of Fairmount or Upper Ferry Bridge (and formally as the Lancaster Schuylkill Bridge) – was a record-setting timber bridge across the Schuylkill River near Philadelphia. It was built in 1812 by Louis Wernwag, and was considered his finest bridge design. It had a clear span of 340 feet (103.6 m) and the longest single-span wooden truss to be erected in the United States as well as the first long span bridge to use iron rods.

The bridge was destroyed September 1, 1838, by fire. The bridge was succeeded by Charles Ellet, Jr.'s wire suspension bridge and then the Callowhill Street truss bridge. The modern bridge at this site is the Spring Garden Street Bridge.

All content from Kiddle encyclopedia articles (including the article images and facts) can be freely used under Attribution-ShareAlike license, unless stated otherwise. Cite this article:
Colossus Bridge Facts for Kids. Kiddle Encyclopedia.