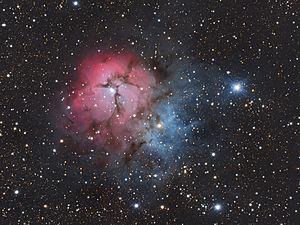 Comme dans l'espace (lit. "Like in Space") is a Canadian French-language children's television program for youth aged 9 – 12. The series explores Astronomy and the Cosmos. In each episode, a new space-related concept is presented using experiments, expert information, and the resources of an android that uses artificial intelligence. The series is co-produced by Botsford Media and Connections Productions.

Season 1 of the series was first aired on the television channel Unis TV on 2 March 2021.

Comme dans l’espace is fiction-based and tells the story of two adolescents, Alex and Joaquim. These two vloggers discover a former secret space agency station (the bunker). With the assistance of an android, Mia, an apprentice astronaut, data from the Canadian Space Agency and various experiments, they explore the phenomena of the science of space.

In each episode, Alex and Joaquim are assigned a new mission from Frédéric Gallant, an apprentice astronaut. Each mission explores a new space-related subject such as black holes, weightlessness and the movement of the planets. Their objective is to learn about the science of the cosmos all the while conducting experiments on Earth. They vlog these experiments and share their experiences with their viewing public.

The location of the bunker is unknown to the public and no-one other than Frédéric and Mia know they are using the bunker to do their vlog. They have several close-calls with the information support technician and a few false alarms to add to their challenge.

The concept of this television series, Comme dans l'espace, is to provide an educational experience for the young, but in effect, it is a show for all ages.

A studio was built in Shédiac, New Brunswick to simulate an old secret space station or bunker. A large part of the story of the production takes place in this 'bunker'.

All content from Kiddle encyclopedia articles (including the article images and facts) can be freely used under Attribution-ShareAlike license, unless stated otherwise. Cite this article:
Comme dans l'espace Facts for Kids. Kiddle Encyclopedia.