Kids Encyclopedia Facts
This page is about the Australian company. For the American company, see Commonwealth Aircraft.

The Commonwealth Aircraft Corporation (CAC) was an Australian aircraft manufacturer. The CAC was established in 1936, to provide Australia with the capability to produce military aircraft and engines.

In 1935 the Chief General Manager of Broken Hill Proprietary (BHP), Essington Lewis, visited Europe and formed the view that war was probable. On his return to Australia, concerned at the lack of manufacturing capabilities there and at the possibility of aircraft not being available from 'traditional' (i.e. British) sources during wartime, he commenced a lobbying campaign to convince the Australian Government to establish a modern aircraft industry. The government required little persuasion and encouraged negotiations between a number of Australian companies. The outcome of these negotiations, begun in August 1935, was the formation of CAC the following year. Initially the companies involved were BHP, General Motors-Holden, and Broken Hill Associated Smelter Pty. Ltd. These were joined by Imperial Chemical Industries of Australia and New Zealand, the Orient Steam Navigation Company Ltd. and the Electrolytic Zinc Company of Australasia Ltd. at the time of CAC's formation (the company was incorporated in Melbourne on 17 October 1936). By September 1937 a factory had been completed at Port Melbourne. 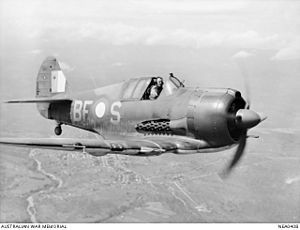 Shortly after the establishment of CAC, Mascot-based Tugan Aircraft was purchased. This led to Lawrence Wackett joining the company; he immediately became the General Manager. It is almost entirely due to Wackett's efforts that the Wirraway became the first aircraft produced by CAC. In 1935 Wackett had led a technical mission to Europe and the United States to evaluate modern aircraft types and select a type suitable to Australia's needs and within Australia's capabilities to build. The mission's selection was the North American NA-16; with CAC's modifications this became the Wirraway. CAC also undertook production of the Pratt & Whitney R-1340 engine used in the Wirraway and also built some propellers when supplies from alternative sources became problematic. With its first aircraft type the company thus became one of very few in the world that have produced an aircraft fitted with engines and propellers made by the same company (see also de Havilland).

While CAC largely produced Australian versions of foreign aircraft, it also developed a number of original designs during and after the Second World War. These indigenous designs include the Wackett, which was only the second type produced by the company. The Wackett was a simple trainer aircraft, but later designs during World War II were the sophisticated Woomera and CA-15, however these types were destined to fly only in prototype form. Other, jet-powered aircraft designs in the 1950s and 1960s did not even leave the drawing board, however in 1951 CAC was given the go-ahead to design and manufacture a version of the F-86 Sabre with a revised engine and armament. The Sabre was developed and produced concurrently with the indigenous Winjeel trainer, with Sabre manufacture coming to an end in 1961.

In 1964 after a large amount of political lobbying CAC began producing components for the Sabre's replacement, a version of the Dassault Mirage III, as a subcontractor to the Government Aircraft Factories (GAF). In 1967 CAC commenced licence production of a version of the Aermacchi MB-326 optimised for Australian conditions, this programme ended in 1972. In 1971 CAC joined the small number of aircraft manufacturers which have built both fixed- and rotary-winged aircraft, when it began production of a variant of the Bell Kiowa for the Australian Army and Royal Australian Navy, the last of these was delivered in 1977. The same year CAC embarked on a Life Of Type Extension (LOTEX) programme for the Macchi, which was suffering fatigue problems. The LOTEX programme lasted until 1984. The CAC became a fully owned subsidiary of Hawker de Havilland in 1985 and was renamed Hawker de Havilland Victoria Limited in 1986. This company was purchased by Boeing Australia in 2000. 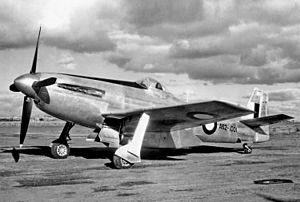 CAC produced an extremely wide range of aircraft for the Royal Australian Air Force and civilian operators. These aircraft included the:

The Kiowa was the last type built by CAC. The company was part of the Australian Aircraft Consortium which designed the A10 Wamira, but this programme was cancelled in 1985 shortly after the prototype was completed. At the time of purchase by Hawker de Havilland, CAC had begun delivering components for the GAF-built version of the F/A-18 Hornet. 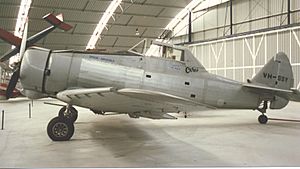 During its existence the Commonwealth Aircraft Corporation produced over 1700 aircraft of all types, including prototypes and aircraft assembled locally from imported components. Of these, almost 550 were examples of aircraft types wholly designed by the company. The designations used by CAC reflected production or design work in fulfillment of different in-house projects or government contracts rather than different types produced (for instance the different designations for the Wackett and Winjeel prototypes compared to their production versions). Early types were given consecutive manufacturer's construction numbers (c/nos.), while later types (beginning with the production version of the Winjeel) were given c/nos. with the model number as a prefix. Construction numbers 1210 to 1224 appear not to have been assigned. The list of company designations and construction numbers is: 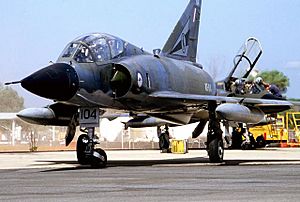 Mirage III, the engines for which were built by CAC

As already noted, CAC produced aircraft engines under licence. It also designed the R795 Cicada which was intended to be used in the Winjeel. The Cicada was designed to be built using existing tooling that CAC had previously used to produce Pratt & Whitney R-1830 engines. The Cicada was a 7-cylinder geared radial engine of 795 cubic inch (13 litre) capacity; like the Pratt & Whitney R-985 that was eventually fitted to all Winjeels it developed 450 horsepower (340 kW). Because of its lower cubic capacity the Cicada was more complex (and thus significantly heavier) than the R-985 and also had higher fuel consumption. Only two development examples of the Cicada were ever built, one of which was actually fitted to Winjeel prototype (RAAF serial) A85-364. The two engines accumulated about 650 hours before the programme was terminated in September 1953.

Engine types produced by CAC include the:

To supplement revenue and retain skilled sheet metal workers, CAC produced and bodied buses based on Bedford Chassis under the brand name of Comair. CAC major shareholder in the 1950s was General Motors and from the 1940s until the early 1970s CAC produced buses, primarily Bedford SB and Bedford VAM70s for Victorian operators. Subsequently, G.M. divested its shareholding in CAC and the company built Volvo and MAN bus bodies under contract to the ACT Government.

All content from Kiddle encyclopedia articles (including the article images and facts) can be freely used under Attribution-ShareAlike license, unless stated otherwise. Cite this article:
Commonwealth Aircraft Corporation Facts for Kids. Kiddle Encyclopedia.