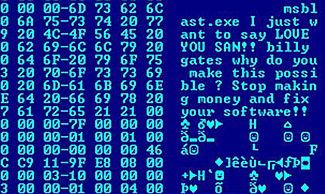 Hex dump of the Blaster worm, showing a message left for Microsoft CEO

A computer worm is a standalone malware computer program that replicates itself in order to spread to other computers. Often, it uses a computer network to spread itself, relying on security failures on the target computer to access it. Worms almost alwa piece of code which is capable of copying itself and typically has a detrimental effect, such as corrupting the system or destroying data.ays cause at least some harm to the network, even if only by consuming bandwidth, whereas viruses almost always corrupt or modify files on a targeted computer.

Many worms that have been created are designed only to spread, and do not attempt to change the systems they pass through. However, as the Morris worm and Mydoom showed, even these "payload free" worms can cause major disruption by increasing network traffic and other unintended effects. 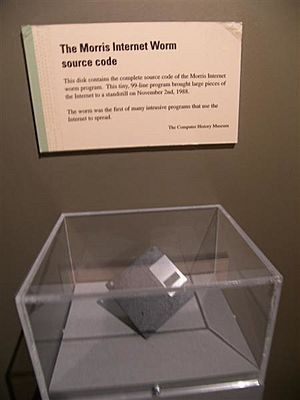 The actual term "worm" was first used in John Brunner's 1975 novel, The Shockwave Rider. In that novel, Nichlas Haflinger designs and sets off a data-gathering worm in an act of revenge against the powerful men who run a national electronic information web that induces mass conformity. "You have the biggest-ever worm loose in the net, and it automatically sabotages any attempt to monitor it... There's never been a worm with that tough a head or that long a tail!"

On November 2, 1988, Robert Tappan Morris, a Cornell University computer science graduate student, unleashed what became known as the Morris worm, disrupting a large number of computers then on the Internet, guessed at the time to be one tenth of all those connected During the Morris appeal process, the U.S. Court of Appeals estimated the cost of removing the virus from each installation was in the range of $200–53,000, and prompting the formation of the CERT Coordination Center and Phage mailing list. Morris himself became the first person tried and convicted under the 1986 Computer Fraud and Abuse Act. 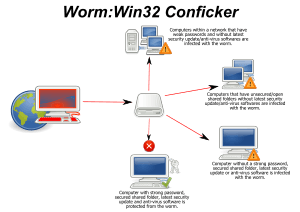 Any code designed to do more than spread the worm is typically referred to as the "payload". Typical malicious payloads might delete files on a host system (e.g., the ExploreZip worm), encrypt files in a ransomware attack, or exfiltrate data such as confidential documents or passwords.

Probably the most common payload for worms is to install a backdoor. This allows the computer to be remotely controlled by the worm author as a "zombie". Networks of such machines are often referred to as botnets and are very commonly used for a range of malicious purposes, including sending spam or performing DoS attacks.

Worms spread by exploiting vulnerabilities in operating systems. If user interaction is required for the malware to spread, it is called a Trojan horse.

Vendors with security problems supply regular security updates (see "Patch Tuesday"), and if these are installed to a machine then the majority of worms are unable to spread to it. If a vulnerability is disclosed before the security patch released by the vendor, a zero-day attack is possible.

Users need to be wary of opening unexpected email, and should not run attached files or programs, or visit web sites that are linked to such emails. However, as with the ILOVEYOU worm, and with the increased growth and efficiency of phishing attacks, it remains possible to trick the end-user into running malicious code.

Anti-virus and anti-spyware software are helpful, but must be kept up-to-date with new pattern files at least every few days. The use of a firewall is also recommended.

In the April–June 2008, issue of IEEE Transactions on Dependable and Secure Computing, computer scientists describe a potential good new way to combat internet worms. The researchers discovered how to contain the kind of worm that scans the Internet randomly, looking for vulnerable hosts to infect. They found that the key is for software to monitor the number of scans that machines on a network send out. When a machine starts sending out too many scans, it is a sign that it has been infected, allowing administrators to take it off line and check it for malware. In addition, machine learning techniques can be used to detect new worms, by analyzing the behavior of the suspected computer.

Users can minimize the threat posed by worms by keeping their computers' operating system and other software up to date, avoiding opening unrecognized or unexpected emails and running firewall and antivirus software.

All content from Kiddle encyclopedia articles (including the article images and facts) can be freely used under Attribution-ShareAlike license, unless stated otherwise. Cite this article:
Computer worm Facts for Kids. Kiddle Encyclopedia.