Kids Encyclopedia Facts
This page is about the island in Lough Neagh. For other uses, see Coney Island. 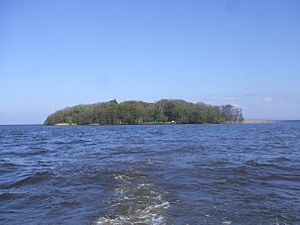 Coney Island, Taken from the back of Trostan on the crossing to Maghery country park

Coney Island is an island in Lough Neagh, Northern Ireland. It is situated approximately 1 km from Maghery in County Armagh, is thickly wooded and of nearly 9 acres (36,000 m2) in area. It lies between the mouths of the River Blackwater and the River Bann in the south-west corner of Lough Neagh. Boat trips to the island are available at weekends from Maghery Country Park or Kinnego Marina. The island is owned by the National Trust and managed on their behalf by Armagh City, Banbridge and Craigavon Borough Council. Coney Island Flat is a rocky outcrop adjacent to the island. Although Samuel Lewis called Coney Island the only island in County Armagh, Armagh's section of Lough Neagh also includes Croaghan Island, as well as the marginal cases of Padian and Derrywarragh Island.

Coney Island was once known as Innisclabhall and then as Sydney's Island. 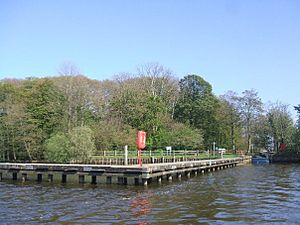 Coney Island has a rich history with long evidence of human occupation. Excavations carried out in 1962-63 indicated that there was a settlement on the island in Neolithic times which lasted into the Bronze Age. The island was connected to the mainland by a causeway or submerged ridge, which can be seen in summer when it is under less than two feet of water. It is known locally as Saint Patrick's Road, as the saint is said to have used the island as a place of retreat. This causeway was breached in the 19th century to allow the passage of barges from the Bann to the Blackwater. 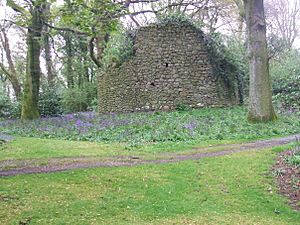 It features a 13th-century Anglo-Norman motte. and was one of the most westerly outposts of the Normans during their settlement of Ireland. A native settlement flourished there in the later Middle Ages when there was also a small iron industry. Subsequently, the island was refortified with a bank, ditch and an external palisade. 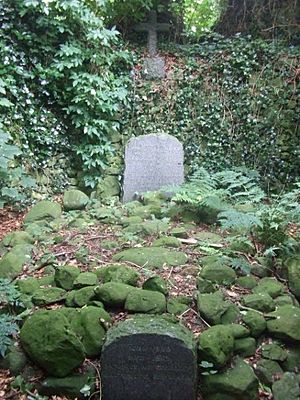 Grave in the Norman Round Tower on Coney Island

It also has a 16th-century stone tower used by Shane O'Neill as a lookout post and stronghold for his riches, and largely reconstructed. The island was one of O'Neill's major strongholds, but was delivered to Lord Deputy Sir Henry Sydney in 1567, and appears to have continued in use as a fort for a generation at least. At some later point the defences were thoroughly razed. In the 17th and 18th centuries the island was only sporadically occupied. In the 1890s, Coney Island was bought by James Alfred Caulfield (1830-1913), 7th Viscount Charlemont, supposedly for £150. He lived in Drumcairne, just outside Stewartstown, and bought the island building a summer house in 1895. The Viscount's remains are entombed in the tower on the island. In 1946 the island was given to the National Trust by Fred Storey. 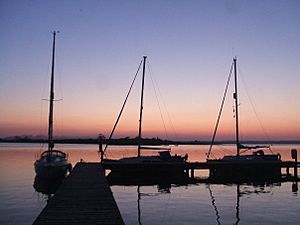 Sailing boats in for the night, Coney Island, Lough Neagh

All content from Kiddle encyclopedia articles (including the article images and facts) can be freely used under Attribution-ShareAlike license, unless stated otherwise. Cite this article:
Coney Island, Lough Neagh Facts for Kids. Kiddle Encyclopedia.