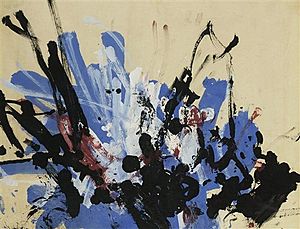 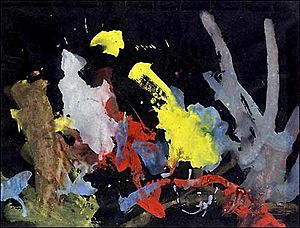 Another one of his paintings, around 1957

Congo was a chimpanzee that learned how to draw and paint. He was born in 1954, and died in 1964. Desmond Morris, who studied his behaviour, gave him materials to paint, but didn't show him how to do it. During his life, Congo made over 400 paintings. People living at the time of Congo thought his paintings resembled abstract art. Nadezhda Ladygina-Kohts had done similar experiments with chimpanzees in Moscow. In 1913, Khots found that the drawings resembled those of her two year old son. At the time when they were done, people did not think highly of them. Despite this, artists such as Herbert Read, Julian Huxley and Pablo Picasso bought some of Congo's paintings. In 2005, three of Congo's paintings were sold at an auction for more than 14,000 pound sterling. The auction house at first thought that the paintings would not sell for more than 600 to 800 pounds.

All content from Kiddle encyclopedia articles (including the article images and facts) can be freely used under Attribution-ShareAlike license, unless stated otherwise. Cite this article:
Congo (chimpanzee) Facts for Kids. Kiddle Encyclopedia.