Conidae (also previously referred to as Coninae), with the current common name of "cone snails", is a taxonomic family (previously subfamily) of predatory sea snails, marine gastropod molluscs in the superfamily Conoidea.

The snails within this family are sophisticated predatory animals. They hunt and immobilize prey using a modified radular tooth along with a venom gland containing neurotoxins; the tooth is launched out of the snail's mouth in a harpoon-like action.

Because all cone snails are venomous and capable of "stinging" humans, live ones should be handled with great care or preferably not at all.

In the Journal of Molluscan Studies, in 2014, Puillandre, Duda, Meyer, Olivera & Bouchet presented a new classification for the old genus Conus. Using 329 species, the authors carried out molecular phylogenetic analyses. The results suggested that the authors should place all living cone snails in a single family, Conidae, containing four genera: Conus, Conasprella, Profundiconus and Californiconus. The authors grouped 85% of all known cone snail species under Conus, They recognized 57 subgenera within Conus, and 11 subgenera within the genus Conasprella. 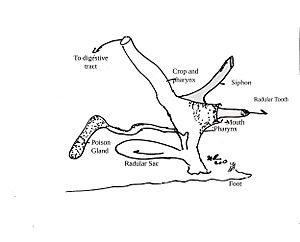 There are approximately 30 records of humans killed by cone snails. Human victims suffer little pain, because the venom contains an analgesic component. Some species reportedly can kill a human in under five minutes, thus the name "cigarette snail" as supposedly one only has time to smoke a cigarette before dying. Cone snails can can sting through a wetsuit with their harpoon-like radular tooth, which resembles a transparent needle.

Normally, cone snails (and many species in the superfamily Conoidea) use their venom to immobilize prey before engulfing it. The venom consists of a mixture of peptides, called conopeptides. The venom is typically made up of 10 to 30 amino acids, but in some species as many as 60. The venom of each cone snail species may contain as many as 200 pharmacologically active components. It is estimated that more than 50,000 conopeptides can be found, because every species of cone snail is thought to produce its own specific venom.

Cone-snail venom has come to interest biotechnologists and pharmacists because of its potential medicinal properties. Production of synthetic conopeptides has started, using solid-phase peptide synthesis.

W-conopeptide, from the species Conus magus is the basis of the analgesic drug Prialt, an approved treatment for pain said to be 1000 times as powerful as morphine and used as a last resort in specific application. Conopeptides are also being looked at as anti-epileptic agents and to help stop nerve-cell death after a stroke or head injury. Conopeptides also have potential in helping against spasms due to spinal cord injuries, and may be helpful in diagnosing and treating small cell carcinomas in the lung.

The biotechnology surrounding cone snails and their venom has promise for medical breakthroughs; with more than 50,000 conopeptides to study, the possibilities are numerous.

All content from Kiddle encyclopedia articles (including the article images and facts) can be freely used under Attribution-ShareAlike license, unless stated otherwise. Cite this article:
Conidae Facts for Kids. Kiddle Encyclopedia.