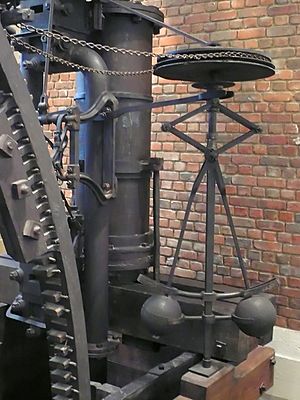 Centrifugal governor of a Watt steam engine, of 1788.

Control theory is an interdisciplinary branch of engineering and mathematics. It deals with the behavior of systems. The desired output of a system is called the reference. In that context, a system can be influenced by certain input values. Depending on the input values, the system may change its state or its behavior. Common questions control theory asks:

One of the first modern peple to talk about control theory was James Clerk Maxwell. In his work On Governors, of 1868, he looked at the dynamic properties of centrifugal governors, as they were used by steam engines. Such governors were already used to regulate the speed of windmills.

A system is a model used to describe the behaviour of something in the real world that takes inputs and produces outputs. For example, a car is a system in that the driver chooses how hard to press on the gas pedal (the input) and the car drives along the road at a certain speed (the output). In the case of a car, the input to the gas pedal does not fully determine the speed of the car. The weight in the car, the incline of the road, the traction of the tires, the current speed of the car, and other factors can all change the output received for a particular input. Control theory attempts to determine what inputs will result in a desired output, or reference. This is accomplished using differential equations, linear algebra, and other branches of math. Control theory relies heavily on computational models and software.

All content from Kiddle encyclopedia articles (including the article images and facts) can be freely used under Attribution-ShareAlike license, unless stated otherwise. Cite this article:
Control theory Facts for Kids. Kiddle Encyclopedia.