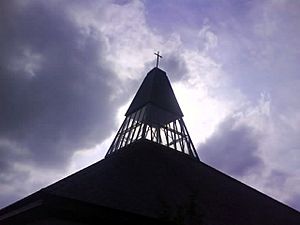 Coosan is a suburb just north of Athlone, County Westmeath in Ireland. It is surrounded on three sides by Lough Ree and on one side by Athlone.

Coosan's population has grown from around 400 in the 1990s to roughly 5000 in the early 21st century, mostly because of the Celtic Tiger. It attracts many tourists over the summer months due to its location on the edge of Lough Ree.

Queen of Peace church in Coosan was opened in 1973.

All content from Kiddle encyclopedia articles (including the article images and facts) can be freely used under Attribution-ShareAlike license, unless stated otherwise. Cite this article:
Coosan Facts for Kids. Kiddle Encyclopedia.