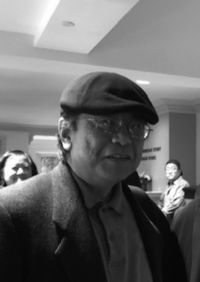 Mayor of New York City David Dinkins made May 5, 1988 "Corky Lee Day". Many of his photographs appeared on Downtown Express and The Villager during the 1990s and 2000s.

All content from Kiddle encyclopedia articles (including the article images and facts) can be freely used under Attribution-ShareAlike license, unless stated otherwise. Cite this article:
Corky Lee Facts for Kids. Kiddle Encyclopedia.