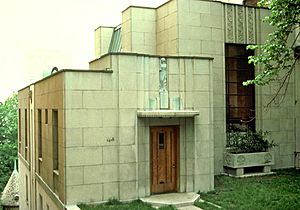 It was built by architect Ernest Cormier in 1930–31 as his own residence. In 1974, the building was designated as a historical monument in Quebec.

Cormier experimented with a variety of styles in the house: Art Deco on the facade, monumental on one side, and more modernist in the back. Cormier created most of the furniture, with remaining pieces acquired at the 1925 Exposition Internationale des Arts Décoratifs et Industriels Modernes in Paris.

Cormier House has been designated as a historic property under Quebec's heritage legislation, the Loi sur les biens culturels. The house appeared on a stamp issued by Canada Post in 2011.

All content from Kiddle encyclopedia articles (including the article images and facts) can be freely used under Attribution-ShareAlike license, unless stated otherwise. Cite this article:
Cormier House Facts for Kids. Kiddle Encyclopedia.