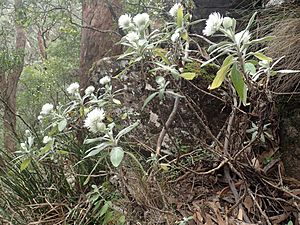 Coronidium elatum, commonly known as the white paper daisy or tall everlasting, is a perennial herbaceous shrub in the family Asteraceae found in open forests in eastern Australia. A woody shrub 0.6 to 2 m (2.0 to 6.6 ft) tall, it has white flowers which appear in spring. It was known as Helichrysum elatum for many years until it was finally reviewed in 2008.

The tall everlasting was collected by the English botanist and explorer Allan Cunningham and described by him in Augustin Pyramus de Candolle's 1838 work Prodromus Systematis Naturalis Regni Vegetabilis as Helichrysum elatum, the species name being the Latin adjective elatus "tall". The large genus Helichrysum was long recognised as polyphyletic and many of its members have been transferred to new genera. Botanist Paul Graham Wilson erected the new genus Coronidium for 17 species of daisy of the eastern states of Australia, and it was given its new name of C. elatum in 2008. Three subspecies are recognised, two of which are highly restricted in distribution. Subspecies vellerosum is found on the summit of Mount Warning and is more woolly-leaved and reaches a height of 1 m (3.3 ft), and subspecies minus is found only at Point Lookout in New England National Park. Reaching 80 cm high, it has smaller and thinner leaves than the nominate subspecies.

The plant is a woody shrub or subshrub with an erect habit reaching anywhere from 0.6 to 2 m (2.0 to 6.6 ft) high. The ovate to elliptic leaves are up to 12 cm (4.7 in) long with entire or wavy (sinuate) margins, and sit on 1–2 cm long petioles. The petioles and leaf undersides are covered in white hair, the upper leaf surfaces less so. The flowers appear from June to November, with plants most floriferous in September. The disc is yellow and bracts are white, the flower heads 2.5 to 4.5 cm (0.98 to 1.77 in) in diameter.

Coronidium elatum is found from the southeastern corner of Queensland, along the eastern coastal regions of New South Wales and into the tip of eastern Victoria. It grows on shale, basalt or sandstone-based soils which are high in nutrients, in open forest or rainforest margins, under such trees as brown barrel (Eucalyptus fastigata), mountain grey gum (E. cypellocarpa), messmate (E. obliqua) or white stringybark (E. globoidea). It can be abundant after bushfires and on disturbed ground. 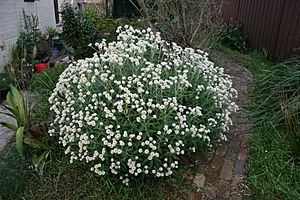 'sunny side up' cultivated in Sydney garden

Coronidium elatum is a highly regarded and underutilised garden plant, producing abundant flowers and growing quickly. It is frost hardy and grows in full or part sun. It can be propagated from seed, or by cuttings, although these are susceptible to rotting. One cultivar, Coronidium elatum 'Sunny Side Up', has been released commercially.

All content from Kiddle encyclopedia articles (including the article images and facts) can be freely used under Attribution-ShareAlike license, unless stated otherwise. Cite this article:
Coronidium elatum Facts for Kids. Kiddle Encyclopedia.